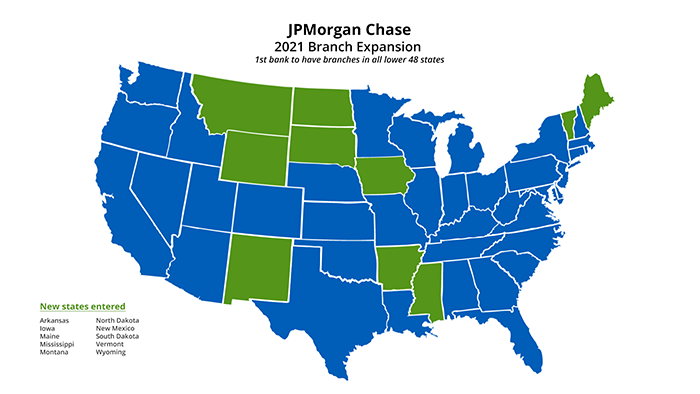 Bank becomes the first to have branches in entire contiguous United States
More than halfway through plan to open 400 new branches and hire 3,000 employees by the end of 2022

Billings, Mont., August 4, 2021 – Chase today announced that it has officially opened bank branches in all of the lower 48 states, marking an important milestone in its expansion plans and as the first national bank to have a retail presence in the contiguous United States. The bank opened its first branch in Billings, Montana earlier this week following openings in Arkansas, Iowa, Maine, Mississippi, New Mexico, North and South Dakota, Wyoming and Vermont in July.

The bank is more than halfway through its plans to open 400 branches in new markets by the end of 2022. Since announcing expansion plans in 2018, Chase has opened more than 220 branches and entered 25 new states and the District of Columbia. Approximately 30 percent of these branches will be in low-to-moderate income communities.

“This is an important milestone for us. We are proud to be able to bring the power of our branches to more households, businesses and communities across the country,” said Jennifer Roberts, CEO of Chase Consumer Banking. “For us, it’s important that our branches serve as community anchors connecting our neighbors and local businesses to critical resources that meet their financial needs and help them build a secure financial future.”

As part of its branch expansion, Chase expects to hire 3,000 employees in these new branches by the end of 2022, with more than 2,000 hired so far. More than 75 percent of hires are external to the firm and local to their community.

“When we talk about entering new markets, we’re talking about our own communities, our own neighborhoods. We’re hiring locally and are bringing all the benefits our firm has to offer to drive economic growth,” said Dan Deegan, Head of Market Expansion at JPMorgan Chase. “We’re designing branches that allow us to effectively serve our customers and that reflect the vibrancy and diversity of each one of our communities.”

Chase plans to complete its 400 branch expansion effort by the end of 2022. To check for updates or to learn more about Chase’s branches, products and services, please visit Chase.com.

About Chase
Chase is the U.S. consumer and commercial banking business of JPMorgan Chase & Co. (NYSE: JPM), a leading global financial services firm with assets of $3.7 trillion and operations worldwide. Chase serves more than 60 million American households with a broad range of financial services, including personal banking, credit cards, mortgages, auto financing, investment advice, small business loans and payment processing. Customers can choose how and where they want to bank: More than 4,800 branches in 48 states and the District of Columbia, 16,000 ATMs, mobile, online and by phone. For more information, go to chase.com.